To verify that the lengths of tangents drawn from an external point are equal.

Tangents to a circle: 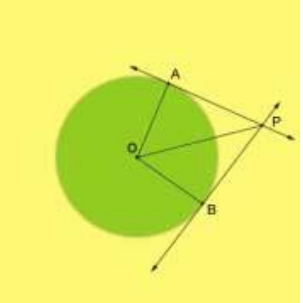 A tangent is a line in the plane of a circle that intersects the circle in exactly one point.

Tangent Lines to circles from the subject of several theorems, and play an important role in many geometrical constructions and proofs. Since the tangent line to a circle at any point P is perpendicular to the radius to that point, theorems involving tangent lines often involve radial lines and orthogonal circles.

It is observed that if two segments from the same exterior point are tangent to the circle, then they are congruent. If AP and BP are tangent to a Circle O then AP = BP.