To demonstrate the scattering of alpha particles by gold foil.

Model for the structure of an atom had been first proposed by J.J. Thomson. Later, followed many theories however, Rutherford's model was finally accepted as the correct nuclear model. Rutherford had shown his model with help of an experiment.

Rutherford's model of an atom :

Ernest Rutherford was interested in knowing how the electrons are arranged within an atom. Rutherford designed an experiment for this. In this experiment, fast moving alpha (α)-particles were made to fall on a thin gold foil.

It was expected that α-particles would be deflected by the sub-atomic particles in the gold atoms. Since the α-particles were much heavier than the protons, he did not expect to see large deflections. But, the α-particle scattering experiment gave totally unexpected results . 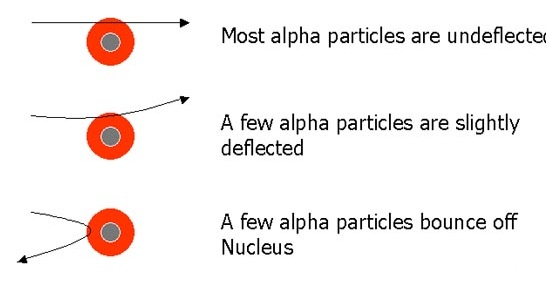 On the basis of his experiment, Rutherford put forward the model of an atom, which had the following features:

Rutherford's alpha particle scattering experiment shows the presence of nucleus in the atom.

It also gives the following important information about the nucleus of an atom: